Many people who are familiar with talismans know very well that these symbols can be used for either of two purposes – first to protect oneself from evil and second to attract good luck. What people may not know is that each talisman symbol varies according to where it originated from.

For instance, Muslims, Christians, and Jews, who believed in the healing power of Talismans, wore these symbols in three ways. One version can be worn or carried in the body. The second version, on the other hand, is left hanging above a sick person’s bed. Last but not the least, these people believe that there are also Talismans with medicinal qualities.

The last classification for Talisman symbols in Muslim, Christian and Jewish beliefs comes in different varieties. The first can be placed in baths, a method in which the amulet is placed inside the water. The healing powers will then be transmitted from the water to the bather. The second classification for Talismans with medicinal qualities is one that can be inscribed in food. These magical inscriptions are being made before the food gets boiled. The person who happens to drink the broth from this process will then get healed from any sickness. 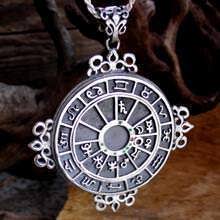 By the Artist – David Weitzman and the Astrologer Michael Ofek

Aside from Muslims, Christians, and Jews, people from different parts of the world also have their own histories associated with the use of Talismans. Take the case of the Celts who were noted for wearing their Voodoo drawings as amulets. Not to forget their four-leaf clover that is said to bring good luck to the wearer.

Buddhists, on the other hand, wore footsteps of the Buddha and conch shells to represent their religion in Talismanic tradition. Of course, the Chinese also had their own Talismans in the cricket – a small creature that they capture alive and keep inside an osier box. This, they believe, will attract good luck. Besides the cricket though, the Chinese also presupposed that coins and rice grains can bring about good fortune. 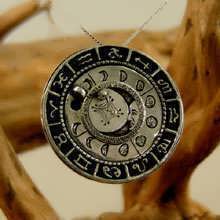 A Rare and Genuine Moon Talisman that is also a Lunar Calendar!!

Some countries made use of other forms of symbols and connect them with Talismanic purposes. In the case of people from Central Europe, a clove of garlic, together with the cross, was considered a talisman symbol that can keep vampires away. For repulsion and attraction, perfumes and colored candles were popular options for Afro-Caribbean individuals. As a protection against thieves and all sorts of bad elements, Scandinavians made use of the non-alphabetical rune that seems to depict Thorn’s hammer.

Talismans remain very popular up to these days. In fact, many people coming from different religious sects wear their own symbols to serve as protection and inspiration for their daily lives. Even children of these ages keep smooth stones inside their pockets in the belief that these will, later on, serve as talismans symbols and bring about magical changes in their lives.