Th OM is a Sanskrit word is both a mystical symbol in Hinduism, Buddhism, and Jainism, as well as an incantation, intoned at the start or the end of a reading, mantra or prayer. Om or Aum is also said to represent the Brahman, or the impersonal Absolute of Hinduism, who is omnipotent, omnipresent and the source of all life. Just as God is to other religions, Brahman cannot be understood or perceived fully. This is the way it is important for the symbol Ohm to be his manifest or representation.

The Om symbol is composed of three distinct sounds: a, u and m. It should be pointed out that the number three is important in Hinduism since it teaches that there are three worlds (earth, heaven, and the atmosphere), three major gods (Brahma, Vishnu, and Siva), and three Vedic scriptures: Rg, Yajur, and Sama. Because of this, it is believed that Om contains the essence of life and the universe. It is also said that sound (the sacred sound Om) was created before the universe. The Mandukya Upanishad states that ‘Om is the one eternal syllable of which all that exists is but the development. The past, the present and the future are all included in this one sound, and all that exists beyond the three forms of time is also implied in it.’ 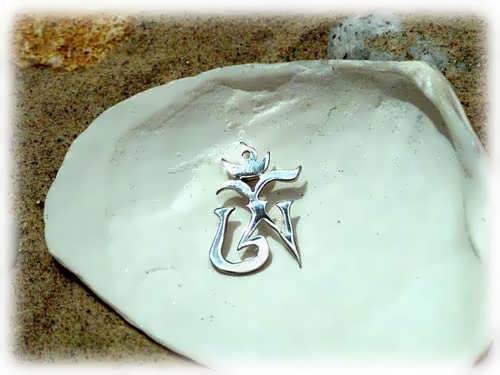 Part of the Tibetan Jewelry collection by the artist David Weitzman